Excessive sand mining for concrete production and disposal spent garnet waste from industrial activity causes environmental degradation. These degraded materials need to be inclined with other ways such as being a substitution of fine aggregate thus, preserving the environmental resources. The purpose of this study is to investigate the durability aspect of concrete containing spent garnet in acidic environment. Spent garnet was used as partial sand replacement with 0%, 10%, 20%, 30% and 40% in each of the concrete mixes designed respectively. Initially, the water absorption test was conducted on sets of 3 water-cured concrete cubes for the plain concrete and also for each percentage of spent garnet concrete mixes. Furthermore, the durability tests under 5% of hydrochloric acid and 5% of sulphuric acid solutions were conducted. Sets of concrete specimens which were 3 set of 28 days water-curing specimens for each percentage of spent garnet in each type of acid immersion have been evaluated respectively. Additionally, another set of concrete specimens containing 3 cubes for each spent garnet content was cured in water for 56 days for the comparison purposes. At the end of the study, the highest percentage of water absorption was concrete mix of 20% sand replaced with spent garnet (C20). Other than that, the stronger average concrete strength of concretes from both acids with the achieved target compressive strength was concrete C20 which having 30.8MPa and 19.3MPa for each acid, respectively. The concrete containing 20% of spent garnet had better acid resistant in terms of visual assessment not only towards sulphuric acid attack but also towards hydrochloric acid attack. Conclusively, the utilization of spent garnet in concrete mixture could bring good expectation as partial sand replacement for construction industry resulting of conserving the natural resources.

Concrete as a building material is increasingly used in many construction project all over the world. The rising demand for concrete production also causes increase in consumption of raw materials supply system such as aggregate quarrying business, cement manufacturing trade and sand mining industry. Sand being an important mixing ingredient that acts as a filler in concrete internal structure to in to product compact concrete is obtained through mining activities from the river. Excessive exploitation of river sand from its river beds causing several environmental issues such as loss of biodiversity, vegetation is destroyed, disruptions to ecosystem and deformation of riverbeds [1]. The destruction to aquatic life also affects the income of community depending on resources from the river [2]. Several studies have been conducted in the past to address such issues [3, 4, 5]. Therefore, alternative partial sand replacement is necessity to be explored further to overcome the depletion of fine aggregates [6]. In this study, spent garnet as an industrial had emerged as a potential candidate to satisfy those criteria.

Generally, garnet which is an imported material can be applied in industrial purposes such as water filtration granules, water jet cutting, abrasive blasting media and etc. Garnet can be recycled three to five times for blasting then it will no longer able to be reutilized for blasting purposes [7]. These spent garnets are hence unrecyclable anymore and the disposal of such waste garnets can affect the ecological balance [8]. Continuous practice of disposing the spent garnet waste at landfill would require more space to be allocated in future thus limiting the area of land that could be used for other development. In such situation, the utilization of spent garnets as sand replacement for fine aggregates in concrete will be the most ideal solution for sustainable construction and to solve the depletion issue for natural river sand.

All the raw materials used for concrete preparation are obtained from local supplier. The water supply used in this research was tap water. Besides, distilled water was used for durability testing to prepare chemical solution as indicated by ASTM C1602/C1602M – 18 [9]. Cement according to BS EN 197-1 [10] standard was used as binder. In this study, fine and coarse aggregates were obtained from local supplier. The spent garnet waste which was obtained from landfill was utilized as sand replacement material at various percentage by weight of sand. All specimens were cast in form of cubes and water cured before testing period. The water absorption test were conducted in compliance with the BS 1881: Part122 (2011) [11]. The resistance of concrete upon exposed to different types of acid were evaluated by immersing it in 2 types of acid solution that is 5% of hydrochloric acid and 5% of sulphuric acid solution for certain duration. After exposure to acid solution, the compressive strength was determined according to the standard in BS EN:12390-3: 2019 [12].

Figure 1 shows that the percentage of water absorbed by the concrete specimens ranged between 6 to 9%. The results were acceptable as the ability of absorption for all fine aggregates relatively sufficient in order to obtain the compressive strength required for concrete. In general, the water absorptions of all the specimens are lower compared to the permissible limits of 10% recommended by [13]. The improvement in pore structure enhances the strength of concretes specially for specimens with 20% spent garnets which have water absorption levels similar to the control specimens. This might be due to fine particles of spent garnet; the smaller particle size allowed these fine particles to fill in the spaces and create more compact structure. Researcher elsewhere [14] also reported that the use of spent garnet as partial sand replacement in concrete influences the water absorption of concrete. 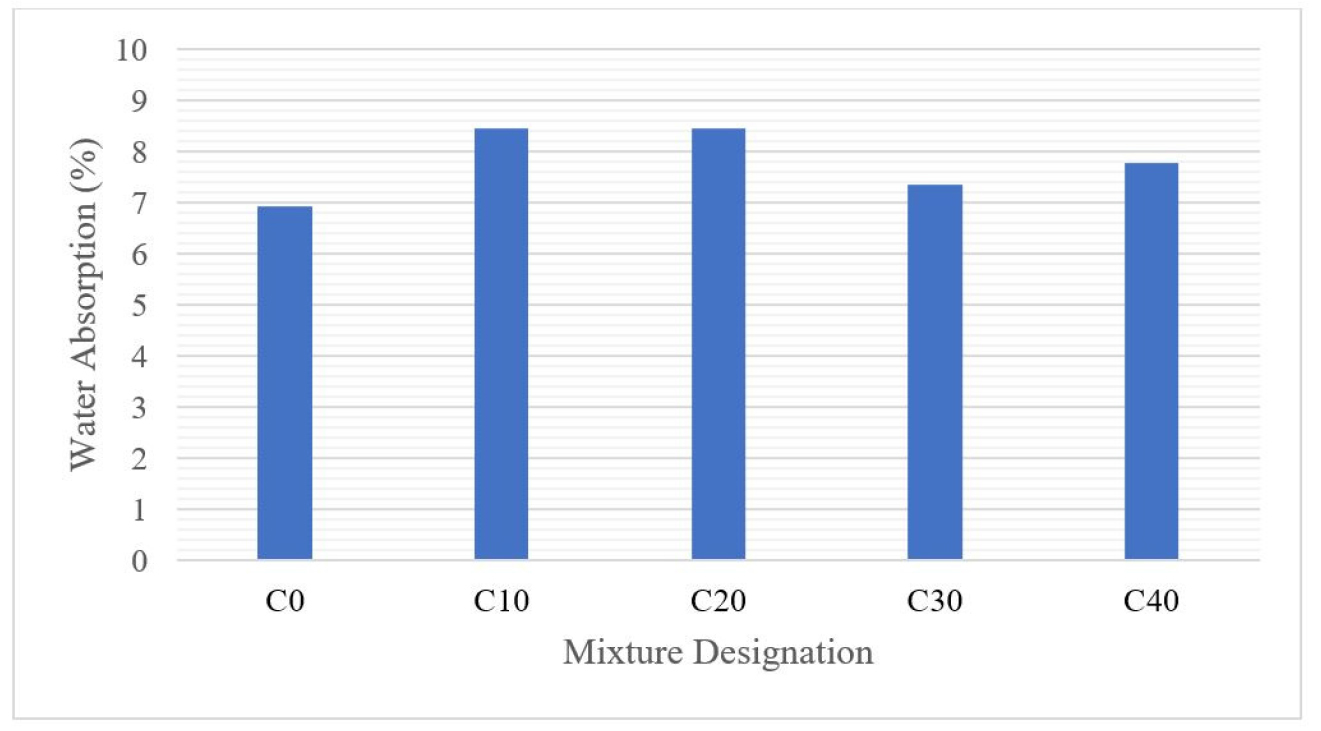 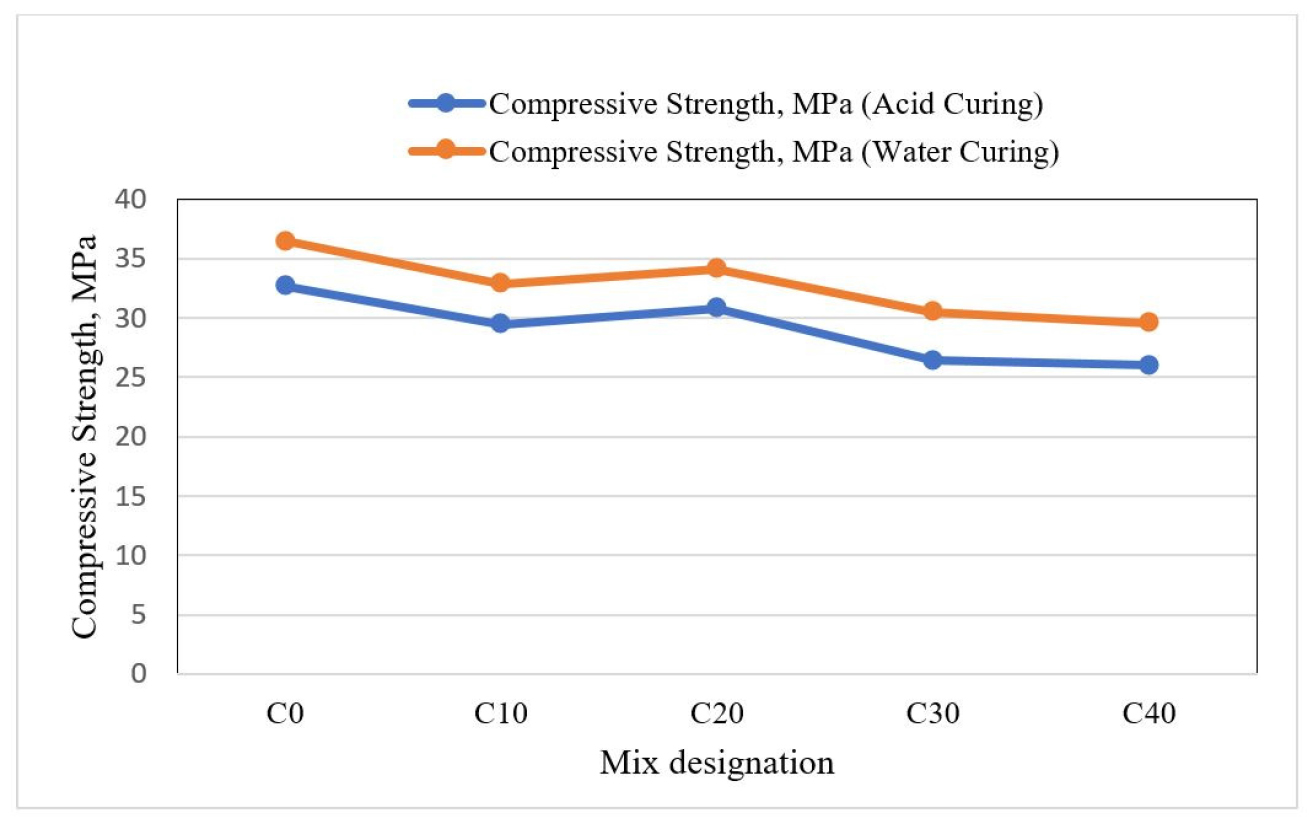 Compressive strength of concrfvete specimens after immersion in 5% HCl. 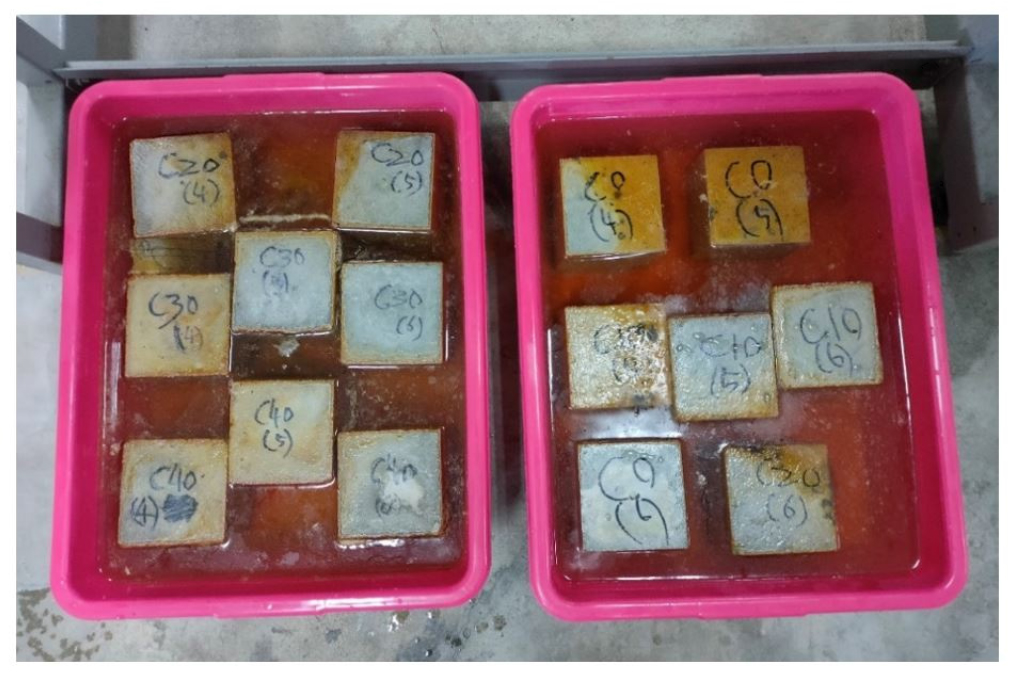 The compressive strengths of concrete cubes with and without spent garnet after 28 days of water curing followed by 28 days of 5% H2SO4 immersion were recorded and analysed. Figure 4 shows immersion of concretes specimens in 5% sulphuric acid solution.

Compressive strength of concrete specimens after immersion in 5% H2SO4.

Integration of spent garnet up to 40% produces concrete with water absorption less than 10% enabling it to be classified as good quality concrete. All specimens experience gradual strength reduction upon exposure to acid solution for longer period. Concrete containing 40% spent garnet exhibit the lowest compressive strength of all upon exposure to acid sulphuric solution. Further investigation is required to determine suitable percentage of spent garnet as partial sand replacement in concrete with enhanced strength and durability.

This research was supported by Ministry of Higher Education (MOHE) through Fundamental Research Grant Scheme (FRGS/1/2020/TK01/UTHM/03/2).