Climate change has been accelerated, which influences building energy consumption; in particular cooling energy in summer in Seoul, Korea. The prolonged hot season with urban heat island makes occupants run air conditioning over the season which could cause a shortage of National grid power. Existing and new buildings need to cope with climate change. This paper addresses verifying energy performance with different window ratios and canopies which are common elements in a building. Dynamic simulation tool, Designbuilder v7, with Energyplus engine is used to show the performance of between building elements. Canopy shows more adaptation with better energy reduction in the climate change in the 60% and 90% window-to-wall ratio (WWR).

The world is suffering from climate change which causes frequent flooding, drought, disease and building energy demand. This changing environment tends to threaten not only user’s comfort but also building energy consumption. According to statistics, people are apt to use more energy to cope with the changes in the environment such as colder winter, hotter summer, longer rainy season and so on. South Korea is no exception for the energy consumption increasing every year. The Korean government announced the ‘Report on Korea climate change in 2020’ to understand and respond to the risk of climate change. Korean peninsula shows rapid climate change more than other places on earth therefore preparation in all parts of the industry is needed [1].

The blackout that electrical service stops entirely happened in 2011 which caused a lot of damage and loss to industry for the unexpected heatwave in Korea. Since that, the government have tried to save and balance electricity in case of emergency. Among the preparations for climate change, cooling energy in the summer, which is exacerbated yearly, plays an important role to control national energy power. In addition, urban area like Seoul shows higher temperature than that surrounding areas. Urban heat islands become noticeable as urban structures store and emit heat during the night by themselves due to shrinking green spaces, increasing asphalt, and buildings with highly dense materials [2]. In addition, the high density of high-rise buildings prevents wind flow and heat from escaping to the outside, allowing cities to sustain higher temperatures than other suburban areas [3]. The urban heat island is described as being covered with a blanket and is pointed out as the main culprit of the rising building energy consumption recently. As a megacity, Seoul has shown rapid climate change in which temperature is measured at 2.2°C higher than the surrounding areas [4]. This requires in relatively high cooling energy usage in summer and is easy to reach the threshold of power supply again in 2022 for the recorded heat wave in Korea [5]. According to statistics by the Korean government, 60% of total energy use in summer is used for building energy, and this trend is expected to increase every year [6]. Besides, existing buildings consume more power than new buildings due to insufficient insulation materials and poor performance of the window system. However, it is not easy to enforce it with the building owner’s responsibility because it costs a fortune to refurbish or rebuild to minimise energy demand. Replacing the existing windows, adding insulation, extra airtightness, etc., are the methods mainly used in existing buildings, and research on them has been actively carried out. However, the application in practice is limited as only a few methods can be applied due to financial limitations and the feasibility of building materials. Reducing energy demand in summer is particularly required for the preparation for climate change with simple and clear application. Therefore, this research would like to reveal the most effective methods for future climate exploration with simulation to window ratios of the office and a shading device with different sizes which can be easily applied in buildings.

Under the United Nations umbrella, the IPCC publishes reports on climate change on an ongoing basis. The report contains information about the potential of limiting global temperature rise to 1.5 degrees [7]. The National Institute of Meteorological Science has published the Korean Peninsula Climate Change Outlook Report 2020, which contains content that reduces carbon dioxide emissions in all fields and prepares for climate change. According to this report, there is no significant difference in temperature rise shortly (2021-2040) between the high-carbon scenario (SSP5-8.5) and the low-carbon scenario (SSP1-2.6), but in 2100), it is expected that the temperature will rise by 7.0°C/2.6°C under the high-carbon/low-carbon scenario, resulting in a large difference. In the case of extreme climate events, coming warm days far from the high-carbon scenario (top 10% maximum temperature occurrence days) will increase by about four times, cold nights (bottom 10% minimum temperature occurrence days) will hardly occur, and low-carbon In the scenario, warm work was expected to increase by about a factor of two, and cold days to decrease by half [8]. http://www.nims.go.kr/?sub_num=1171

The IPCC has announced four types of projected scenarios for global climate change and is encouraging responses to them as tabulated in Table 1. This research has been conducted on building energy demand forecasting, peak power analysis, and regional building energy usage analysis due to climate change. In this study, an office building is adopted to simulate for the climate change. Research was conducted on the energy demand, which varied by window ratios and the energy reduction by installing external awnings. This will apply for elemental energy reduction benefits during the retrofitting phase of buildings to prepare for climate change, allowing builders to benefit from not only current climate requirements but future climates as well. 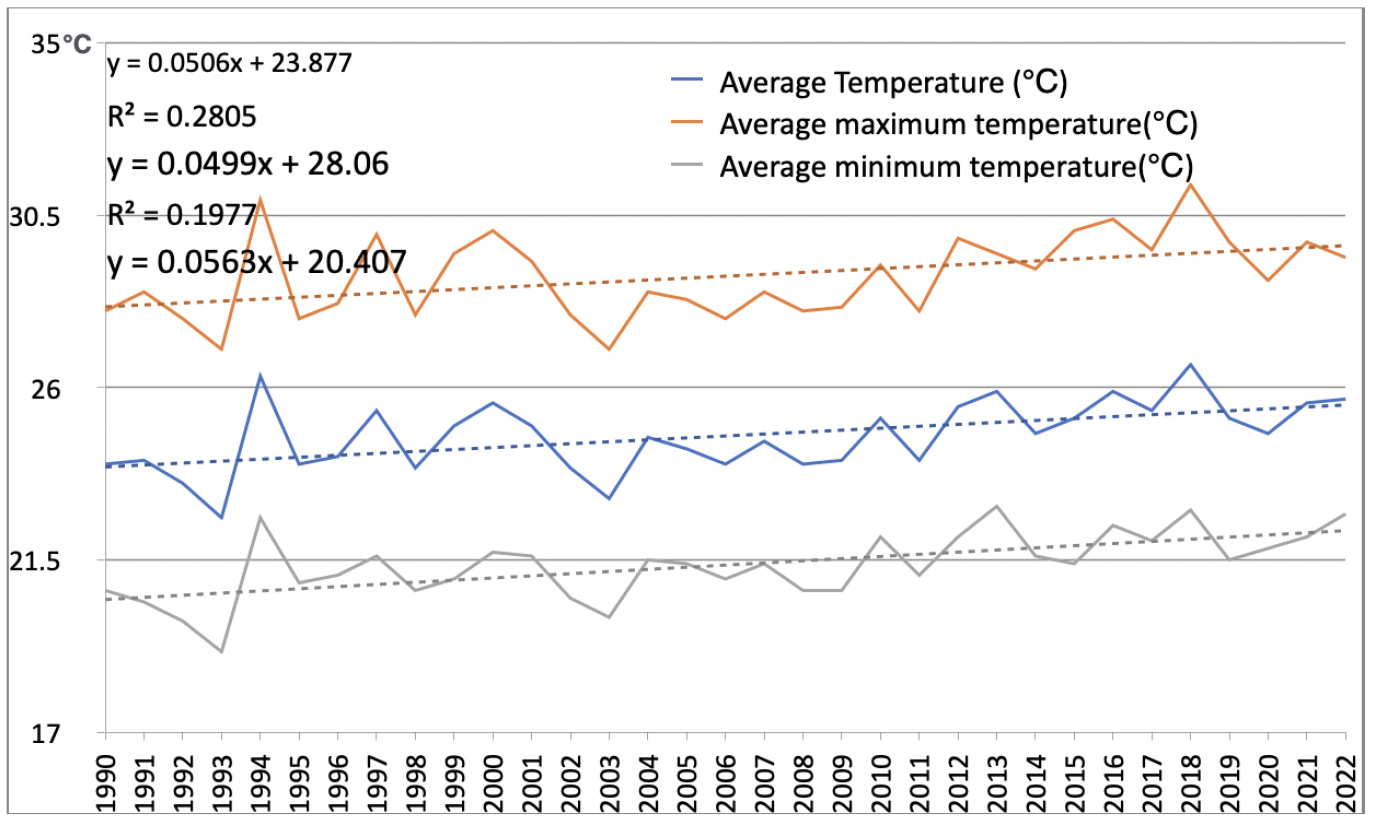 Figure 2 illustrates the frequency of temperatures over 33°C of the heatwave in the last 30 years in Seoul. It can be seen that the number of heatwave days has increased further between the beginning of 1990 and 2020, in which measured temperature data were provided by the Korea Meteorological Administration. This measured data clearly proves that climate change and the tendency of change are faster than ever. Also, the upwards is more frequent since 2000 which means there is more chance of demanding cooling energy in summer. It could conclude that the need for technology of reducing cooling energy is required more than ever. 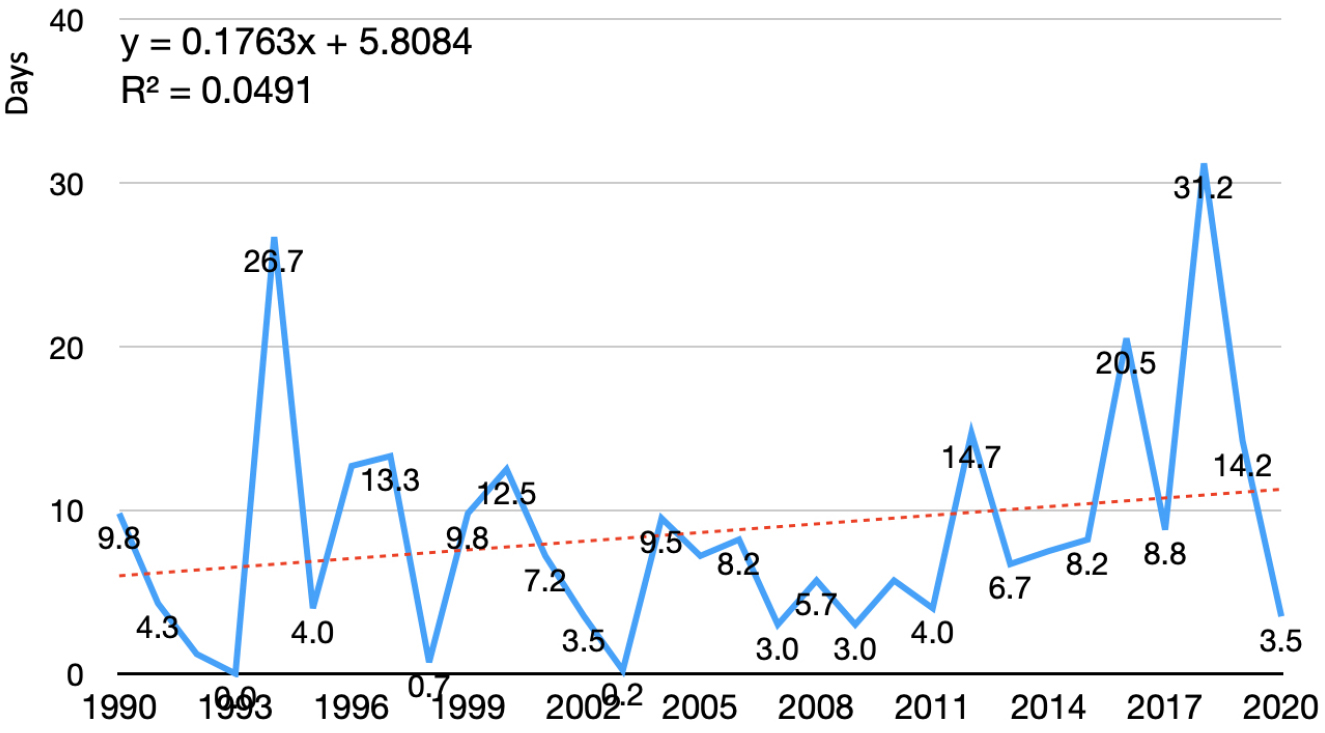 Frequency of temperature over 33 degree Celsius in 30 years.

For the numerical study, Energybuilder v7 is selected to calculate the current and future climate energy demand. DesignBuilder is the most widely used and reliable for building energy simulation as it is based on EnergyPlus: building energy analysis simulation program [10]. Equipped with LEED and ASHARE 90.1 data values, which are environmentally friendly certification system, DesignBuilder is a program that allows you to visualize buildings and build programs in 3D. Solar radiation calculation and lighting environment, CFD, construction material cost analysis function and comprehensive energy can be simulated [11]. For office energy simulation, the region was chosen as Seoul and the initial settings are normal office buildings in Korea. Office models with different window to wall ratios illustrates in Table 1 and input details in Table 2.

For the climate input data, meteorological data is acquired using Meteonorm 7.3, which provides worldwide local data [12]. The software provides annual updates of global climate data to provide the most up-to-date information and formats the climate data required for building energy simulations into various formats for simulation tools. In this study, weather data for 2000, 2020, 2040, and 2060 were derived for the city of Seoul with a carbon emissions scenario of A1B (720 ppm).

In this simulation, widow to wall ratio (WWR) and canopy with sidefins are considered as the main factors which influence on the energy demand.

Energy demand with different window ratios in Figure 3 shows the direct proportion increases along with WWR and decrease with the increase of canopy sizes in Figure 4. 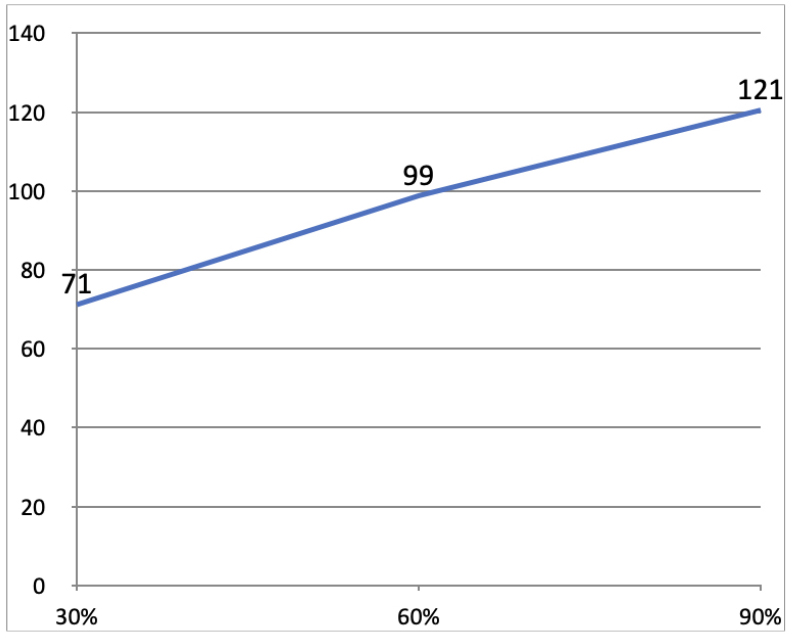 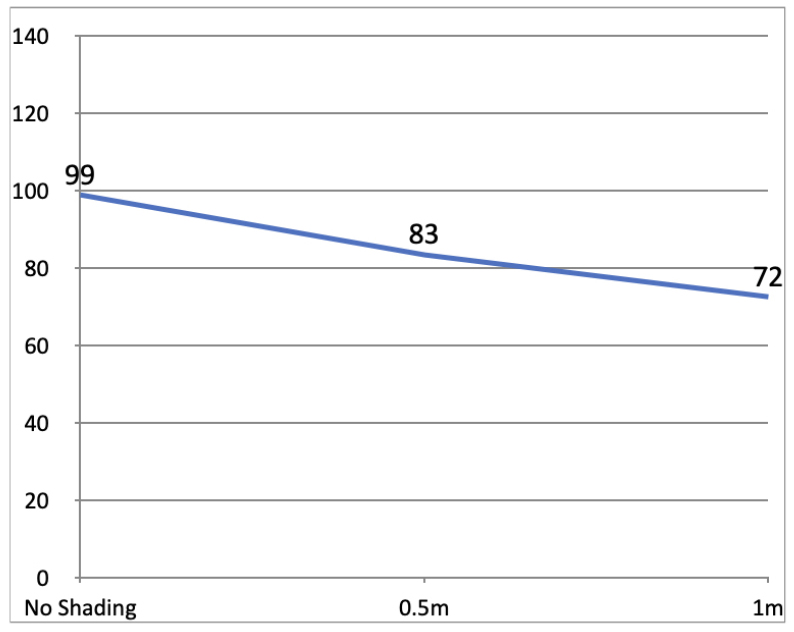 It can be seen in the figure that the office building energy demand was simulated with climate data for the year 2000. Figure 3 shows Energy demand with different window ratios. It shows that the cooling energy in the summer increases as the window area increases at almost the maintenance rate. The cooling power of a building in summer is affected by the length of the shade. In the simulation, a horizontal canopy on the window and side fins on both sides were installed to prevent the influx of direct sunlight as much as possible. Figure 4 shows that the cooling energy consumption decreases as the outer shade length increases. Of course, there is a relationship between the area of ​​the window and the area of ​​the shade. Still, in this study, it is performed an energy simulation with a horizontal shade that covers all the existing windows and both sides, called sidefins, of the same length.

The cooling energy requirement was calculated with three shade conditions in Figure 5 and Figure 6 (a) (b) (c). It can be seen that under the same shade conditions, climate change also increases the overall cooling energy by the same rate. The difference with no shade from other shades is that the overall energy demand is higher. It has the highest overall energy consumption and the most significant change due to climate change. In contrast, having a 1 m shade had a lower overall energy demand and relatively less energy gain as the canopy prevented solar radiation from getting into the inside.

In percentage terms, it concludes that offices with 30% window area enjoy the slightest change in future climate. In other words, it can be said that the penetrated amount of energy is the lowest compared with other factors. Time not comfortable from ASHRAE 55-2004 illustrates in Figure 8.

Time Not Comfortable Based on Simple ASHRAE 55-2004 is based on the sum of the times that zone is not comfortable over the whole year, 8760 hours. This graph from the user’s comfort shows clearly WWR with 60% and 90% performs well along with canopies, which would help for architects and planners to refurbish their buildings to get through with future climate change.

In this study, we analysed the energy requirements of office buildings based on the window area ratio and the length of the canopy shade in preparation for future climate change. For future climate change scenarios, we conducted energy demand simulations in 2000, 2020, 2040 and 2060 based on the medium emission scenario of carbon dioxide (A1B). Even though it’s a limited simulation, it’s a small study that helps the building design for the future. The main findings are summarised below.

(3)Such cooling energy can be slowed down by installing awnings. If a 1 m canopy is installed, the increased tax is 18 to 20 kW/m2, and it shows an increase of 20 to 21 kW/m2 even in the climate of 2060, indicating that the canopy is effective against climate change.

(4)Time Not Comfortable Based on Simple ASHRAE 55-2004 was a user-centric metric that was easy to understand based on time. In the case of a 30% window area ratio with no shading, it can be seen that about a 16% decrease in 1250 hours of uncomfortable time and 1045 hours when 1 m canopy is installed. If the window area is the same, the office with a large window will show an energy reduction of about 23% by installing a sunshade.

Reducing cooling energy in the summer in preparation for climate change is also compatible with the carbon forest policy through energy reduction and helps improve user comfort and operational efficiency.

This work has been supported by the National Research Foundation of Korea (NRF) grant funded by the Korea government (MSIT) (No. 2018R1A2B2004668).