Concrete has been used in large volumes for so many years. However, the use of concrete contributes to high cement and aggregate consumption, leading to an increase in material production. The consequences of these activities have been investigated, discussed, and proved that one of the causes of worsening global warming is due to the whole action from concrete industries. On other hand, many researchers found many alternative ways to prevent the extinction of non-renewable material by replacing current material in concrete or cement production with by-products. For example, cockle shell is an aquacultural by-product material that has been dumped after the consumers gain their meat. In this review paper, the new properties, workability, setting time, and other concrete properties containing cockle shells as cement and coarse aggregates such as thermal conductivity, permeability, and porosity, have been discussed.

Cheap, wider availability, great load-bearing capacity, and a wide variety of construction engineering applications are the primary reasons for what causes concrete is the most used construction material. Traditional concrete is usually weak in tension yet vigorous compression activity [1]. Consequently, in tandem, cement usage with concrete production is increasing. For example, in 2018, Portland cement was used for about 4 billion tons annually [2] and is expected to significantly grow in production in China, India, and certain areas of the Middle East and North Africa [3, 4]. The production of Portland concrete has a significant environmental impact because of CO2 emissions, representing 5 to 8% of carbon dioxide (CO2) emissions per year [5, 6]. Portland cement clinkers [7] are primarily responsible for CO2 emissions. The CO2 emissions created by the decomposition of raw materials during clinker combustion [8] are termed process-related CO2 emissions from concrete manufacturing, primarily caused by the breakdown of CaCO3 when heated [8, 9]. As indicated in Figure 1, the overall emissions from the industrial sector (excluding power sectors) constitute approximately 20% of global carbon emissions, except for direct emissions related to energy use [10]. In addition, a considerable quantity of (about 20%) emissions is produced by industrial manufacturing activities, including cement, chemical manufacture, lime production, and so on, as well as indirect energy usage emissions [11]. 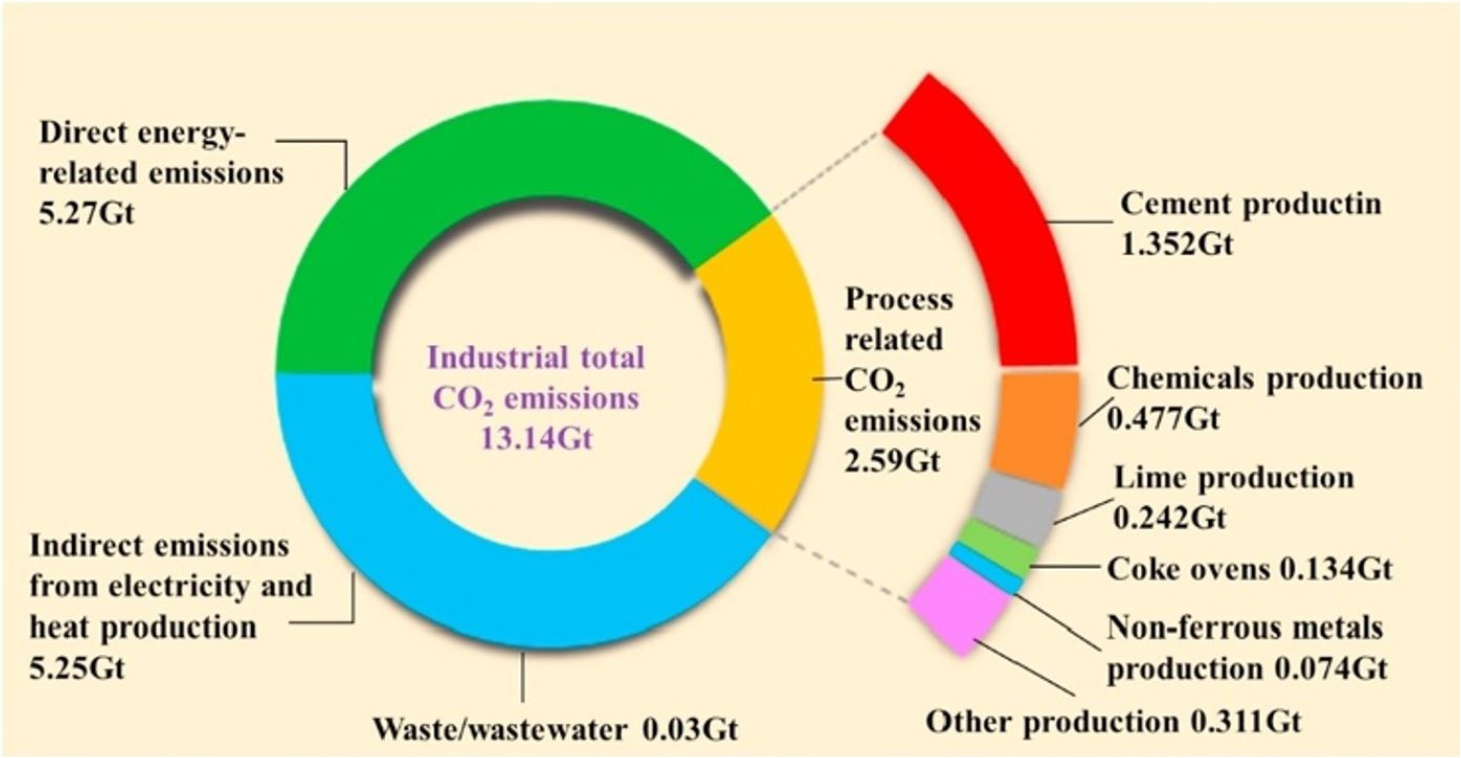 Apart from clay, calcined limestone is a major component of cement. It is a sedimentary rock mostly composed of calcium carbonate (CaCO3). Because limestone is a non-renewable material, its resources are limited, and its stocks either do not regenerate after mining [12] or take a long time to replace [13]. Mining continues to jeopardise resource depletion [14] and environmental degradation [14, 15]. Stone extraction from the hill, which necessitates the removal of trees and plants before they can be harvested, depletes green forests, and adds to global warming concerns. Deforestation has disastrous consequences, including soil erosion, greenhouse effect, biodiversity loss, increased floods, and droughts. The loss of flora and habitat has ramifications for the entire ecological system [16] and hastens the extinction of living organisms. Also, cement production pollutes the environment, including the air [17], water, and land, and contributes to noise pollution [12]. As a result of the cement industry’s negative impact, environmental activists and communities will benefit from using local trash as an alternative resource to reduce reliance on non-renewable products. This strategy would also keep the area from becoming a dumping ground [18].

The increased worldwide use of concrete, environmental concerns, the need for optimal material use, and the positive effect of SCMs on concrete characteristics are driving the widespread use of supplementary cementitious materials (SCMs) in the concrete industry [19]. However, the amount of waste produced worldwide is increasing, posing a threat to the environment and human health. One of the most severe environmental concerns is industrial trash dumping. Several tonnes of industrial by-products are dumped in landfills, polluting groundwater, and destroying natural soil, including cockle shells. In addition, cockles play a vital role in the ecosystem services that many other services rely on [20]. It has a high economic value and is widely exploited throughout its range [21]. In 2019, it has been reported Malaysia exported 538 tonnes of clams, cockles, and ark shells however the amount is increasing in 2020 to 947 metric tonnes [22]. According to the Wild Fact Sheet, the physical characteristics of the cockle shell are approximately 3 to 4 cm in size [23]. The double-shell has a spherical shape and is quite heavy. Most cockle shells are dumped in open sites or sites where only a small percentage is recycled for other purposes, such as fertilizer and handicrafts.

In contrast, others are disposed of in open fields and sites, giving rise to unappealing odors [24] due to the meat’s degradation in the shells or the microbial breakdown of salts into gases like H2S NH2 and others. According to the facts, a cockle shell is an innocuous substance with a high concentration of the CaCO3 chemical. Calcite, aragonite, and vaterite are polymorphs of calcium carbonate (CaCO3), one of nature’s most common minerals [25, 26]. Aragonite has a robust mechanical strength and a moderate biodegradation rate, enabling long-term performance [27]. 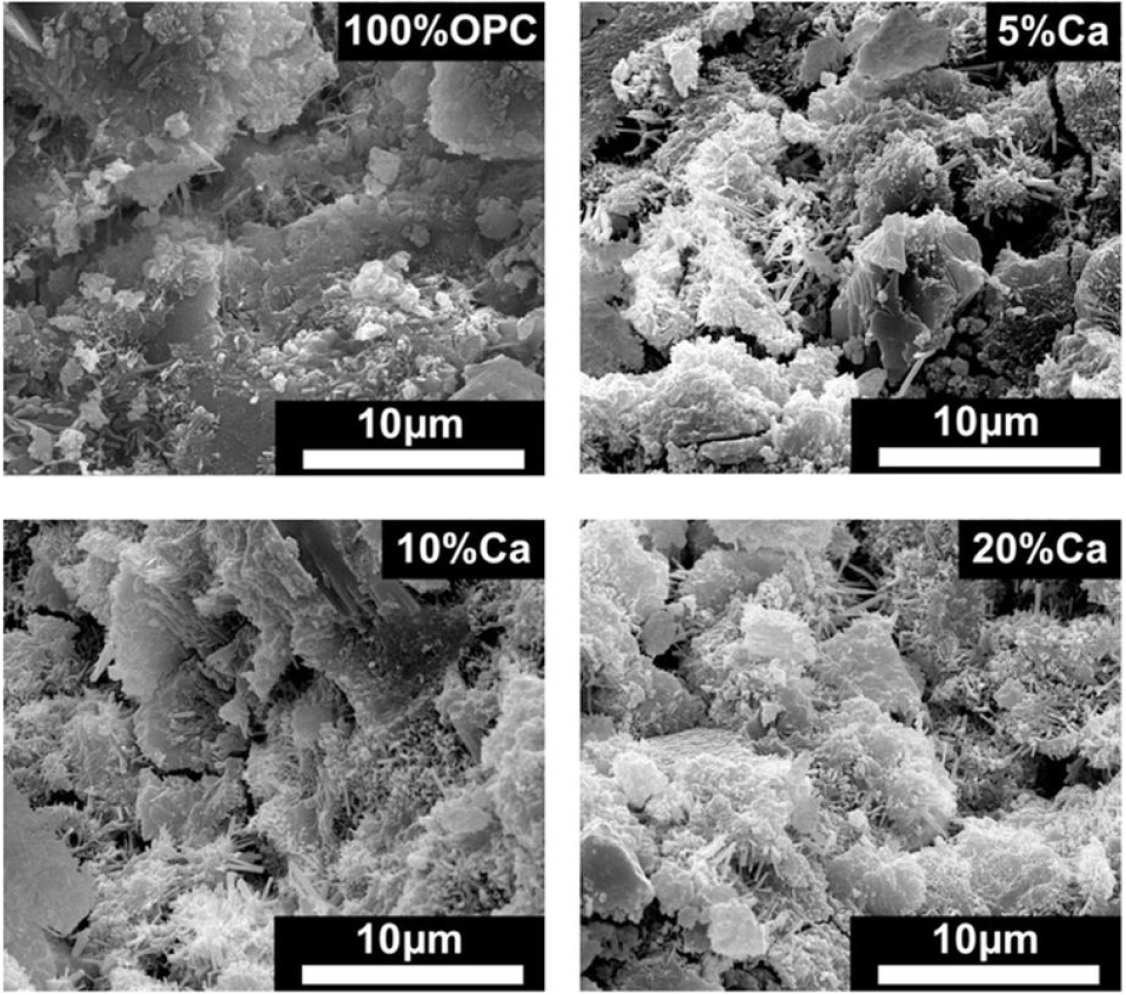 Microstructure of hydrated cement matrix produced in the presence of seashell powder in a mixed cement mixture [28].

Table 1 and Table 2 show the cockle shell’s chemical properties for unburned and burned cockle shells, respectively. CaO is generated after the decomposition of CaCO3 has been performed [26]. As seen in Table 2, the CaO content is 99% that the cockle shell undergoes a calcination phase of less than 1000°C to form cement-like ash. However, as seen in Table 2, CaO content is 51.56% when burned at 500°C, while it was 51.91% when burned at 600°C and has the same volume of CaO as unburned cockle shell as seen in Table 1. This could lead to a firm hypothesis that the mechanism of calcination of the cockle shell at higher temperatures would decompose CaCO3 to higher CaO levels. Additionally, the burning of seashells reduces them to microscopic particles by destroying the chemical bonds between the molecules [29]. Additionally, the seashell burning method eliminates the need to mill the seashells since the burning process between 700°C to 900°C produces a more refined product and converts the compound from CaCO3 to CaO [30, 31, 32, 33].

Porosity is a vacuum that exists in a constant or discontinuous form on the interior and external surface of the concrete and affects the strength of the concrete. At the same time, permeability is a means of evaluating concrete resistance to adverse events, and more solid concrete should be waterproof [36]. By using the volumetric method, vacuum quality has been measured. The empty content may grow as the waste percentage is also raised, according to Khankhaje [41]. This may be owing to the cockle shell’s angular existence, which reduced the compactness of any cockle shell mix and thus perturbed the cockle shell’s granular composition. This is due to the high-water absorption of particles that absorbed more water during the mixing process, thereby trapping the air on the mixture’s surface, thus increasing the void content of the mix. It looked like a vacuum consistency of perpetual concrete mixes was the impact of waste substances on water permeability. Therefore, it was anticipated that the water permeability of perpetual concrete mixtures would similarly rise to a high void value as a regular gross aggregate by increasing the proportion of waste material replacement. Hazurina [36] has determined that, given the average porosity findings, concrete porosity would be reduced by increasing the cockle shell ash replacement ratio except for 25% and 50% (Refer Table 6). The amount of cockle shell ash as a substitute for cement was also reported not to be over 15%.

Influence of the cockle shell on the permeability of the concrete mixtures [41].

Application of Cockle Shell in Other Research

Cockle shell has been noticed to be used as construction material. However, the usages of cockle shells in other research applications are also found. Cockle shell has been widely used for many industrial purposes. For instance, it is applied as a biomaterial for tissues engineering. Cockle shell has been investigated as artificial bones substitute material or best known as bone grafting material [42, 43]. This material replaces unhealthy tissues in an individual [44]. The reason is that orthopedic implant in the USA has a high demand. Previously, the implantation was made from a coral exoskeleton. However, it creates environmental issues because the coral exoskeleton is endangered. Besides that, cockle shell has also been derived as Nanomedicine for drug delivery system in the body via blood capillaries [27]. It also reported that cockle shells could be used for wastewater treatment. The cockle shells are converted into calcium oxide (CaO) for the treatment, which acts as a catalyst for eliminating methylene blue through an advanced oxidation process [33]. Historically, photocatalysts such as titanium oxide (TiO2) and zinc oxide (ZnO) have been widely used in wastewater treatment; however, due to the high cost and scarcity of titanium oxide on the earth [45], the researcher desired to explore the efficacy and efficiency of using CaO derived from cockle shell as a new catalyst.

Because of its chemical similarity to limestone, calcium carbonate (CaCO3), cockle shell is an alternative cementing material that is ideally suited to our construction sector with technical, economic, and environmental benefits. As a result, concerned entities should be made aware of the situation and encourage the manufacturing and usage of certain cement types for acceptable purposes. In addition, because cockle shells are abundant with the required chemical composition, it is possible to replace limestone in cement production. According to this review paper, the finding shows that,

1.The workability of fresh concrete decreases as the percentage of cockle shells as cement and coarse aggregate replacement increases.

2.Setting the time of cockle shell as cement replacement from 0% up to 50% fulfills the ASTM1157-08a requirement.

4.The suitable amount of cockle shell ash as cement replacement for porosity and water permeability is not over 15%.

In a nutshell, future experimental work related to cockle shells as construction material replacement should be emphasized, especially for durability aspects, such as water absorption and density of concrete, acid attack, etc.

The authors express their gratitude for the financial support provided by Universiti Malaysia Pahang through RDU190342 and PGRS200388.